To share your memory on the wall of Marjorie Brown, sign in using one of the following options:

Provide comfort for the family of Marjorie Brown with a meaningful gesture of sympathy.

We encourage you to share your most beloved memories of Marjorie here, so that the family and other loved ones can always see it. You can upload cherished photographs, or share your favorite stories, and can even comment on those shared by others.

Posted Nov 11, 2019 at 01:32pm
My deepest condolences to Marjorie's family and friends. Heaven welcomed home another Angel. Hold on to the Wonderful Memories and Fond Moments of her. I moved to Scranton with National Westminster Bank, Marjorie was my guide to Lackawanna County she was a Graceful Lady.

Posted Oct 23, 2019 at 12:50pm
I worked closely with Marge at Fleet bank, and considered her a beloved friend. We kept in touch with cards and phone calls until recently. I was saddened to hear of her passing. She brought joy, laughter, grace and elegance into our lives. I will remember her fondly always, and shall miss her greatly. Goodbye my friend. ~ Marti 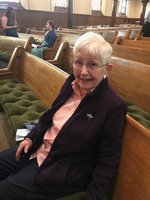