To share your memory on the wall of Giosue Cacioppo, sign in using one of the following options:

To send flowers to the family or plant a tree in memory of Giosue Eugene "Gene" Cacioppo, please visit our Heartfelt Sympathies Store.

We encourage you to share your most beloved memories of Giosue here, so that the family and other loved ones can always see it. You can upload cherished photographs, or share your favorite stories, and can even comment on those shared by others.

Terry and Cindy Madore sent flowers to the family of Giosue Eugene "Gene" Cacioppo.
Show you care by sending flowers

Posted Apr 25, 2021 at 10:21am
Our condolences go out to your entire family. A neighbor one block down and growing up with the boys, Gino was a funny person. He will be missed but his memories live on! Jim & Mary Ann Snyder, Moosic
Comment Share
Share via:
TM

Terry and Cindy Madore purchased the Medium Dish Garden and planted a memorial tree for the family of Giosue Cacioppo. Send Flowers

Posted Apr 23, 2021 at 11:44am
My condolences go out to the Cacioppo family on the passing of Gene. I am a regular member of the South Side Bachelors Club for many years and Geno was a great guy to be with.
He was a very jovial, kind and caring man who as president of the Bachelors on many occasions was a stimulus for the good things that went on at the club.
I played golf with him and enjoyed it a lot. Also, shuffleboard, pool and cards for over 45 years.
I thoroughly looked forward to sitting with him at the club and talking about the Yankees, golf and things going on at the Bachelors. We also shared a "few" beers together.
He was so much fun to be with. Geno did many a good thing for its members. I am proud to have known him and saddened to see his passing.
Mike Pidich, Olyphant
Comment Share
Share via:
TF

Dear Angie and Family, We are so sorry to hear of Gene’s passing. Our thoughts and prayers are with you during this sad time. Love and sympathy, Judy and Rich Senker 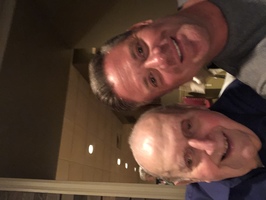